PowerMyLearning is lucky to have local supporters who are invested in our mission and our work across New York City. One such group has taken a creative approach to fundraising. Five friends are running the Bay Ridge Half Marathon on October 6th and raising money for PowerMyLearning along the way.

Not only are they busy training for a half marathon, but they have also developed a fundraising campaign that highlights our work and spreads awareness of our organization. Maybe you have seen them running throughout the streets of New York City in matching shirts, carrying laptops and chatting with strangers about our programs.

Meet this awesome team and support their campaign!

1. How did you get involved with PowerMyLearning?

Being fairly new to New York City (we all came here after graduating college, and have only been here two years), several of us had volunteered with various organizations but felt that the hours we put in did not always make a tangible impact. In a city like New York, it is easy to feel overwhelmed by the amount that needs to be done and how incapable you are to make a dent.

PowerMyLearning was a breath of fresh air in the sense that they didn’t just give you volunteer and donation opportunities; they went a step further to measure the impact their work has on students. Their tangible results were extremely encouraging! We had all planned on running a half marathon and felt that using the event as a way to help our community would be awesome. It got even better when we stumbled across PowerMyLearning. We attended a Family Learning Workshop to make sure that the organization was everything we thought it would be and were blown away by the team, their impact, and the real joy on the faces of the students at the workshop.

2. At PowerMyLearning, we believe that students are most successful when they are supported by their families and teachers. One way we strengthen this “triangle” of student-family-teacher relationships is through Family Learning Workshops. Can you tell us a little bit more about your experience at the workshop and what resonated with you about PowerMyLearning’s mission?

We arrived at the school at 8:45 AM (15 minutes before the workshop started) and many of the families were already there, excitedly waiting! As all of the PowerMyLearning team was busily setting up, I remember feeling worried that I wasn’t going to be much of a help. However, the second the workshop kicked off we had our hands full from start to finish.

It was a wonderful experience to just be present supporting students and families—many of whom were not tremendously familiar with how to set up their new laptops but were infinitely excited nonetheless. We got to know several of the families over that time frame, and it was amazing to see students’ faces light up when they finally got to play some of the games on PowerMyLearning Connect, PowerMyLearning’s online platform. It was a really special experience and we are looking forward to doing it again!

3. What were your biggest takeaways from volunteering with us?

When we attended the workshop we were blown away by how involved everyone was, both kids and parents. I was thoroughly encouraged by how excited the parents were and their genuine desire for their kids to learn and better themselves. While the laptop donation was for the kids, you could clearly tell that this was something that would benefit the whole family.

I was also surprised by how much I take my own technology literacy for granted. Having grown up with computers, it was a juxtaposition to work with many families who had never owned a home computer. It really drove home for me how important and impactful the work that PowerMyLearning is doing for these families as a whole, and not just the young students.

4. Can you tell us about the #AskMeAboutMyLaptop team members?

For sure! Here are our brief bios that we posted on Instagram, many of them take a lighthearted approach to the half marathon we are about to run (none of us have ever done this before!). 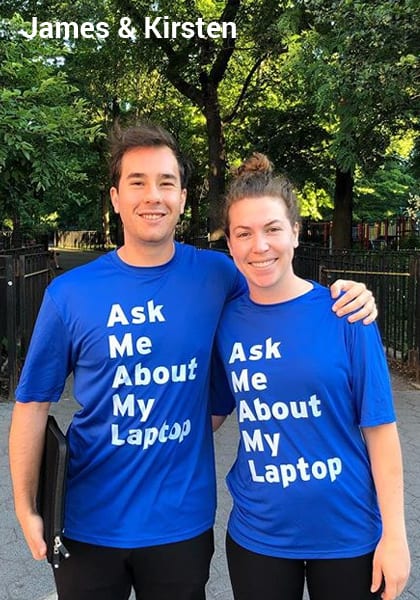 – James: An excitable yet inconsistent runner, James created the #AskMeAboutMyLaptop campaign while lying in bed reflecting on the Family Learning Workshop he attended. He is quick to crack a joke, smile, or share a story, but when it comes to getting the job done, he takes things seriously. He currently lives in Hoboken, NJ and his favorite food is bacon.

– Kirsten: Kirsten is a Philadelphia-suburb transplant. She may have traded her trail-running around log cabins in Valley Forge for the concrete streets of the East Village and Hoboken, but she’s still a PA girl at heart. She takes her cheesesteak “prov wit” (but thinks the unsung hero of Philly cuisine is the Italian roast pork sandwich). She runs for two reasons: 1. To meet all the bulldogs in NYC and 2. To eat her way through the NYC bakery scene, guilt-free. 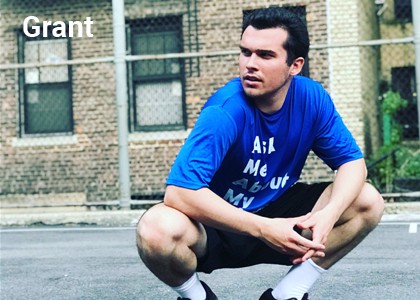 – Grant: Introducing Grant, a slow but steady runner. His friends call him the best pick-up basketball player in alphabet city. Originally from Pittsburgh, but he loves New York and the people from it. Grant is excited to run his first half marathon and help raise money for PowerMyLearning. If you see him around be sure to ask him about his laptop! 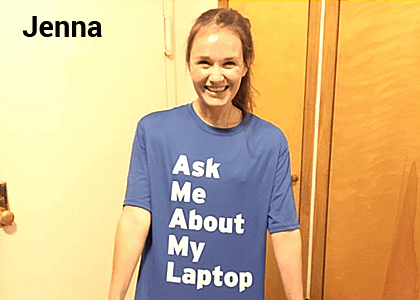 – Jenna:: Meet Jenna one of our team members. Though she doesn’t like to admit it, she’s originally from Long Island. She enjoys yoga and running and can usually be found in her East Village apartment munching on chocolate, cashews, and avocado. If you see her around, be sure to ask her about her laptop! 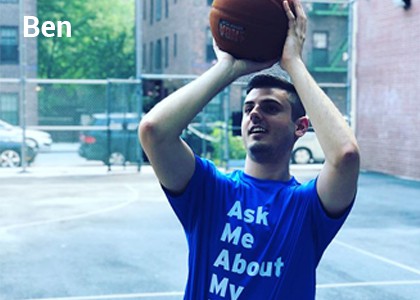 – Ben: Ben is the fastest member of the PowerMyLearning crew! He enjoys cooking, basketball, being right, and winning. Ben has the body of a runner and the athleticism of a bad runner, but loves raising money for a cause! If you see him around, make sure to ask him about his laptop!

5. How can people support your team?

From day one, we wanted to make our mission easy to understand and, more importantly, easy to support. By training for our half marathon while carrying laptops and wearing shirts touting “Ask me about my laptop,” we invited New York-ers to step into our mission with a simple question. While many people were initially skeptical of stopping the crazy people running with laptops, curiosity often won out and two or three people would ask us about our laptop each time we went out to train.

Our approach not only gave us an opportunity to spread PowerMyLearning’s mission in a genuine and memorable way, but also to connect with people. We invited folks to follow us on Instagram (@AskMeAboutMyLaptop) and support our cause on the Crowdrise page. Even if they didn’t support our cause right then and there, a thought was planted in their mind and hopefully they bring that full circle to help their community, whether through PowerMyLearning or another channel.

Check out this link for more information on our fundraising efforts! We’re hoping to raise $2500 by the race in October https://t.co/wKHy1XfzO0

The t shirts are in! pic.twitter.com/sPcYYovBD6