A Conversation with Google’s Jaime Casap

Jaime Casap, the Education Evangelist at Google, does not beat around the bush, especially when talking about his personal experience growing up in poverty and how that has shaped the lens through which he sees the world. Confronting uncomfortable truths is often a catalyst for change, and Jaime is an expert when it comes to “calling it what it is.” We are thrilled to honor Jaime as our Learning Pioneer at the 2018 Innovative Learning Awards later this month.

I recently sat down with Jaime to talk about his insights on education and how they are driven from his own experiences.

You have talked about how education can be a great equalizer, and you have shared your experience growing up and the positive impact education had on your life. How does your education and upbringing give you a different lens or point of view than others in the field?

I grew up with a single mother, on welfare, in Hell’s Kitchen in New York City. I am conscious of the fact that there are very few people in positions of influence with my background, and I think there are two possible explanations for how I got to where I am. One is that I’m a super genius with a 400 IQ. The other explanation is that there are millions of kids who are just like me, who have the same capacity, same capability, but they just don’t have the same opportunity. I believe the latter: there are opportunities that are missing. And I want to focus on what we need to build to give kids those opportunities.

Every year, I am asked to speak at graduations and I tell students my story because I remember when I would be ashamed of my background and hide where I came from. Subconsciously or consciously, we know that people make assumptions about poor people: that they are poor because they are lazy; they are poor because they are dumb; they are poor because it’s their fault. I tell students that the most important thing is to be proud of who you are and where you came from. Look at what you were able to accomplish given the circumstances that you had. I tell them that who they are and where they came from is actually a competitive advantage because they look at things from a different perspective and that different perspective is critically important to companies and organizations when they are making decisions.

One reason I have been successful in my career is my different point of view. I am still the same hoodlum, I just have some more education and a little more influence. 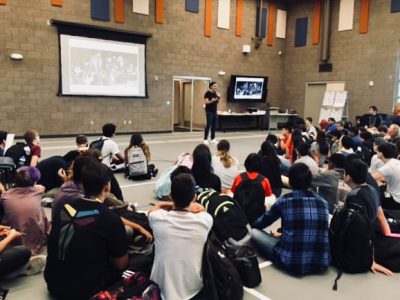 At PS 111 when I was going into fourth grade, I got assigned to Mrs. Riddick, the teacher who was known for being way too hard and downright mean. But the reality was that she had high expectations and wanted to see good results. I remember my first assignment, a two-page current events paper. When she gave it back to me, I saw she had given me an “F” and covered the paper in red marks. At the top was a note to come see her. I had always gotten straight A’s, so this was new territory for me. When I went up to talk to her—and I’ll never forget this—she said, “Compared to the other students, you have a ‘B’ but I’m not comparing you to other students, I’m comparing you to what I think you’re capable of and this isn’t good enough.”

Up until that moment, I believed I just needed to do better than the other kids in my class; that’s who I was competing against. Mrs. Riddick was the first person to tell me, “Your grade has nothing to do with other students or the class average. It has to do with you and your potential.”  That blew my mind, and it still does. Today, I don’t compare myself to other people; I compare myself to my own ability.

How do you think leaders of organizations like ours can best strengthen the triangle of relationships for all students?

We need to do a better job giving parents what they need. It’s like the old adage: teach a man to fish, and you feed him for a lifetime. Well, you have to give him a fishing rod first! Give parents the tools, and they will use those tools.

I think when you’re educated and you’ve gone through the system yourself, then you know to get involved in your kids’ school. In my case, I don’t think that anyone ever told my mother she should be involved in my education. We cannot make assumptions based on what we experience as educated adults that all parents know they should automatically engage. Some parents experience barriers—whether it’s because of culture, language, time—so we need to make it easy, like you all are doing with Family Playlists. You need a system that gives parents permission and encourages them to get involved. This is not just about poor parents, it’s about all parents.

We have seen that poorly executed technology integration can hurt learning relationships, such as when schools invest in software that tries to play the role of teacher or a parent. I’ve also heard you say that you will be disappointed if technology only makes teachers more efficient and that you would like to see technology instead influence how learning happens. What is the right approach to technology and innovation in the classroom?

My goal is to stop getting us to ask the question, “What does the future classroom look like?” Instead, we should approach it from the world we live in now, which is there is no future classroom because the future classroom is on Monday. Look at it this way, every time you go to buy a new car, you expect it to be more advanced than when you bought one the last time.  My first car didn’t have airbags but my second one did.  My second one didn’t have anti-lock brakes, but my third one did. My third one didn’t have satellite radio but my fourth one did. We expect advancement and improvement.  I think we need the same approach in education.

The future classroom needs to start right now. It’s this idea of a cultural shift and thinking in terms of iteration and innovation, where we’re constantly measuring, constantly changing things, and constantly doing things differently based on assessments and feedback. This way, we’re always moving forward. 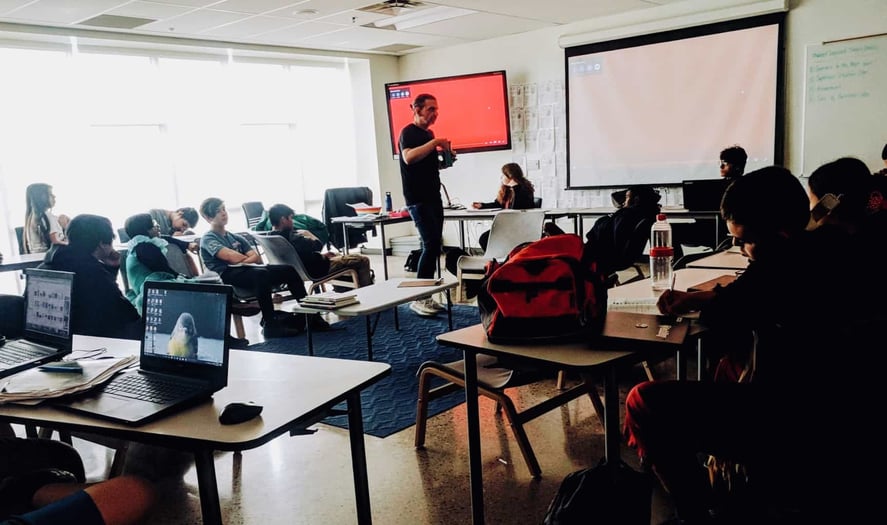 Jaime teaches a 10th grade communication class at the Phoenix Coding Academy and is an adjunct professor at Arizona State University.